This is a beautiful country and I’ve spent the weekend on one of the beautiful beaches with one of my new colleagues and a group of her friends (everyone is so friendly it quite puts me to shame thinking of the casual approach we take in London).  We drove to Tokeh beach, lay about doing nothing but looking at the glorious scene – your standard white sand paradise – drank beer and gimlets, went swimming in the warm sea and there was a bit of dancing too.

On the drive down and back you see the full range of Freetown infrastructure and construction.  Freetown is surrounded by rainforest and palm trees.  Everything is a luscious dark green and the soil is red clay.  Freetonians use corrugated iron for their roofs – if they’re rich enough to have a proper roof – and they like bright colours.  The most popular are bright red and bright blue, but I have also seen bright green and red and white diagonal stripes like a traditional barbers pole sign.   The main roads in town and some of the roads to the beaches are paved and smooth but the side roads and, if you’re driving straight down the coast, the road from River No.2 onwards, are tracks.  We drove back a different way this afternoon because the unmade road we used on the way down was pretty steep, rocky and waterlogged in places already, and last night it rained.  I say it rained.  It was a torrential, apocalyptic, loud downpour – so loud it woke me up. 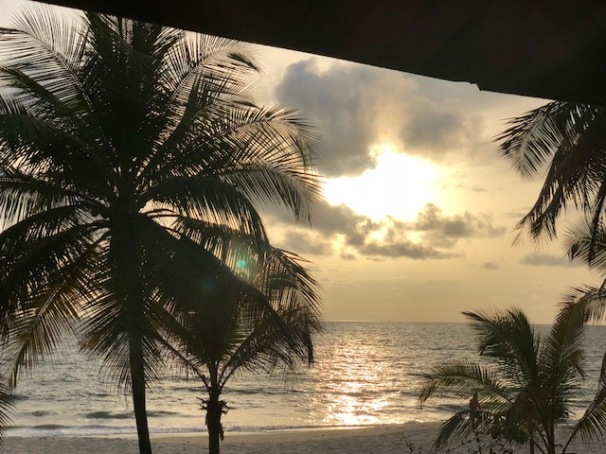 Apparently the rainy season is well under way and it should already be raining much more than it is.  So far there’ve been long periods of sunshine, quite a bit of cloud, and only sporadic rain usually at night (albeit coming down in sheets when it does).  It’s always about 30 degrees though; I absolutely love it.  People’s approach to the rainy season differs.  Some people say it’s terrible and everyone has to stay in and contemplate the wall for 4 months.  Some people say it’s not that bad and there are still some things to do.  On balance I think the second kind of person makes me more apprehensive.

Further achievements:  got the gas bottle changed so my cooker works now (still cringing at memory of saying to the landlord that it was probably empty because it “felt light”) and worked out the washing machine.  I’m making a list of things I need.  This includes saucepans.

I’m still having just the most excellent time.