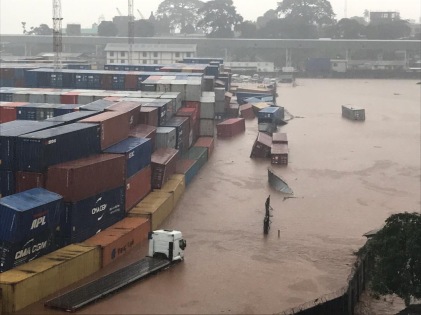 The disasters were declared to be “Level 1” disasters, which means that they can be managed at local council level.  This meant that the Mayor was the lead for the disaster response, which meant that I was in practice in charge of co-ordinating it.  It was very, very hard – not so much because of the deaths and the terrible property and economic damage, but because there were no systems in place to ensure that the response was as fast as possible, and as targeted as possible.

On 1 August, it started raining very hard overnight.  It carried on raining like the end of the world on 2 August.  At first I was sort of amused as there was just a ludicrous amount of rain – the drains immediately started overflowing and I was stuck in the car for 20 minutes once we got to Council as it was raining too much to get out even with an umbrella.

But quite quickly I wasn’t amused because reports started coming in of drownings and destruction of homes, especially in the coastal slum areas.  It turned out that 2 August was also a very high spring tide.  Many of the slums are built essentially in the sea or within river beds and are extremely vulnerable.

There is extensive flooding almost every year in Freetown, with the sole exception being last year – which was a mild rainy season, but the Mayor had also already done 3 months’ worth of flood mitigation work starting as soon as she was elected, clearing the drains of silt and solid waste, and repairing broken and blocked culverts. After the 2018 rainy season, we raised more funds to carry on with the flood mitigation work, and unblocked thousands of metres more drains before 2019 rainy season hit.  If we hadn’t done this work, it’s pretty certain that the 2 and 15 August disasters would have been far far worse.

On the day itself we set up an incident room at Council where councillors in the affected areas could call in and report areas affected, approximate numbers of persons affected, who was having to take shelter in public buildings, and any reported deaths or injuries.

In the afternoon there was a meeting at the Office of National Security, attended by between 90 and 100 people.  This was lots of different NGOs, people from government ministries, people from FCC, people from ONS (which is the official disaster coordination body), people from funders, people people everywhere.  It turns out that when responding to a disaster, you do something called a rapid assessment, using a form in international use which you customise to suit your disaster, and then you do a formal registration process where you register people who are affected by the disaster and to whom you are going to give some humanitarian support.  You need to design the form for registering people and to do this you have to decide what criteria you have to meet in order to be entitled to the support available, you have to decide what that support will be given the finite resources available to you, and you need to have teams of people going out and doing the registration and verifying each and every claim on the ground, immediately.

We spent the whole of the first afternoon in a 3-4 hour meeting with 90 people discussing what the form for the rapid assessment process should look like.  Despite the fact that Sierra Leone experiences flooding every year, and that in 2017 there was a landslide and flooding that killed well over a thousand people, and that in 2015 there were floods in which about 15,000 people were made homeless, there is no standard version of the rapid assessment form to deal with a flood event.  By the end of the meeting, it was too late to go out and do the rapid assessment that day.  On the 3 August, we spent the whole day conducting a rapid assessment process which involved far far too many people, and took a whole day rather than being sorted in a few hours.

And it just continued like that for a month.  I haven’t got the wherewithal to describe it.  It was the most upsetting process I’ve been involved in since I came to Freetown.

By the 15 August flood, I had got a lot better at what was involved, and the Mayor, Manja and myself had had time to set up an information system and rapid response team at FCC who could go out and get eyes on the ground in real time.  As a result, after the 15 August flood we were able to go straight to the registration process and omit a formal rapid assessment.  We also identified the link between the high tides and the flooding on 2 August (a link which no-one seems to have made before) and as a result we were able to warn residents in Freetown that on 15 August the risk of further flooding was extremely high.  We actually evacuated most of one community to a safe place, and they were able to return to their homes once the flood waters receded.  The 15 August flooding had less of an effect in Freetown, but a very severe effect in the rest of the country.

Since the end of August, I can’t sleep if it rains at night – even though I know it’s the end of rainy season now, and the chances of another flood event are basically zero.  After 15 August, I was at the stage of just hoping against hope that there wasn’t another flood event until after 1 September, by which time I would be in the UK on leave and not responsible.  Note – I’d stopped hoping there wouldn’t be another flood event.  I just hoped I wouldn’t be in charge of it. (In the end there were some, but smaller, so they weren’t called an official disaster).

What August really brought home to me is how alone you are, if you are an ordinary Sierra Leonean, in a time of trouble.  No-one is coming to dig you out of the rubble of your house.  No-one is coming in an ambulance with paramedics and painkillers and medical expertise.  If you can get to a hospital you’ll have to pay with money you don’t have for medical treatment.  You don’t have insurance so everything you’ve lost, is lost completely and forever.

Oh yeah and did I mention my bedroom ceiling fell down in the middle of the night too? 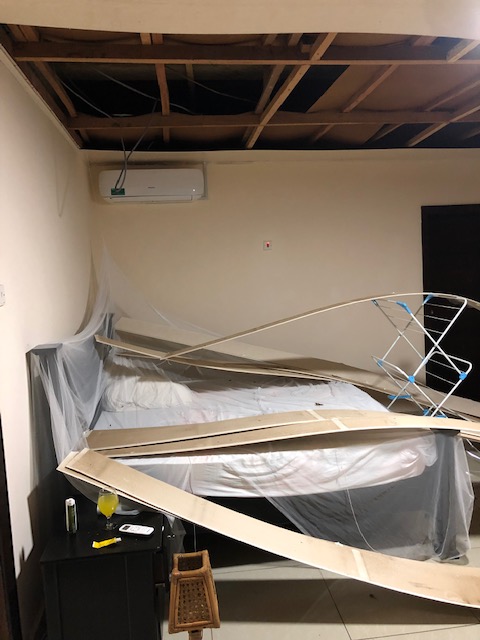 I’ve written a Standard Operating Procedure for the response to the inevitable floods next year (inevitable because notwithstanding the ongoing flood mitigation work, drains get filled again with silt and rubbish, and people live effectively below sea level), and I’ve tried to create standard versions of the rapid assessment and registration forms.  For these to work, the various governments ministries and agencies who are involved need to sign off on them, and the NGOs need to know about them so they can train their people on how to use them.  We tried to set up a workshop to make this happen.  As things stand, though, we’ve been told we need to go through some administrative steps to set up a formal committee and have a launch event with speeches and media, before we can get on with the actual preparation work.  Perhaps you can imagine how I feel about that.  We’re too under-resourced at FCC to be able to do this before I leave at Christmas, so I won’t see the committee set up or my SOP or the two key forms agreed.  The Mayor will have to try to do it next year, before rainy season starts.

We’ve also worked with a few of my favourite NGOs to come up with a concept note for a proper, serious relocation plan for two of the communities who live in extreme hazard prone areas – obviously, in the longer term what is needed is proper urban planning and enforcement so that people aren’t living in these death zones at all.  The urban planning function should be up and running at FCC in 2020 (amazing work on this being done by my colleagues at FCC), but relocation is complicated and difficult and usually fails.  We’ve tried to design a project that will actually work – this would be almost a global first.  Next step is to try and fund it and again:  this is now on the Mayor’s very long list.

I’m leaving Freetown for good on 14 December.  I’m simultaneously heartbroken and can’t wait to come back to a functioning country (seriously.  Brexit notwithstanding).  Just now I’m trying to come to terms with the fact that I haven’t managed to get everything I was working on implemented and functioning, and that I won’t see the results of some projects which I’ve worked my heart out on.

We still haven’t had formal approval of our byelaws (they’re stuck in a central govt office – have been there since April); the complaints system isn’t being used at all (it cuts off some revenue streams; it’s being blocked); we’re having to revise the street sweeping system as parts of it are broken; we mighthave the first transfer stations built by the end of the year but they pretty certainly won’t be up and running; the weighbridge still hasn’t been installed at Kingtom dumpsite and we don’t even know if it’s shipped yet; we haven’t fixed the system of tipping fees at the dumpsite and the faecal sludge treatment plant won’t start working full time until February 2020.  Everything takes an utterly unnecessary period of time:  it kills me.

So on the refuse-to-give-up-come-what-may side: I’m making the most of the lovely TBI and Salone friends I’ve made this year, and back at the beach every weekend because it has almost, almost, almost stopped raining.  I also haven’t caught either malaria or typhoid – contrary to almost every expat I know; it’s the Year of the Typhoid in Freetown for sure – and the only medical drama since I got back from leave was catching conjunctivis within 2 days of arrival back at FCC.  There was an epidemic, apparently. I have photos but it’s just too tragic.

I’ve also got a cool L-shaped sofa made for my balcony with clashing lappa and the sunsets are back so I’m making the most of it with sundowners and eating all meals outside.  Plus I’ve got new cushions and stuff for my living room: it looks quite nice. 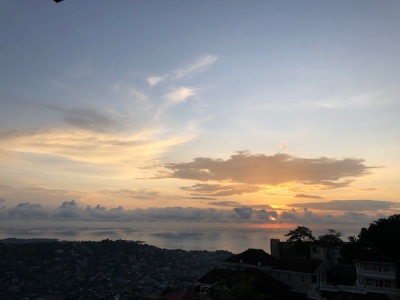 And you know, never a dull moment here.  There’s an outbreak of swine flu apparently.  Certainly the pigs that live on the dumpsite are dying – I was down at Kingtom last week and it was even fouler than usual.  And the meat is being sold in Freetown we’re told…

See you all in December.  If there are fresh food shortages due to Brexit, I am going to wreak a terrible revenge on Boris Johnson.

2 comments on “Disaster in Freetown”