First, the big news.  I’ve got a cook.  She comes in every day and makes me a delicious dinner and leaves it in the fridge.  Can I just repeat that in case you didn’t quite take it in?  I’ve got a COOK who makes me DELICIOUS FOOD every single day.  Her name is Toya and she’s pretty much the best thing that’s ever happened to me.  Just by way of an example, last night I had tuna carpaccio as a starter.  Basically it’s every bit as good as you ever thought it would be, and then some more.

I’ve been having lengthy conversations with my incredibly nice driver, Mustapha, to learn about life in Freetown.  I also make him stop or slow down in traffic on a regular basis to take pictures like the ones below.  They’re a bit rubbish as they’re generally taken out of the car window, but they give a bit of a flavour (please note the barristers’ chambers in particular).  Mustapha laughs at me as I am always on google maps working out what road we’re on, but the other day I gave him directions to a wine shop (priorities) so now I am smug.

View from road just below my house

Congo Cross near where I live

There’s no pictures here of the real slum communities (there are 72 in Freetown), because to be honest I don’t want to take pictures of them as it feels a bit poverty tourism.  The slums are on the coast in low-lying areas or built up the sides of very steep hills.  There’s often a river or stream flowing through them, which is always completely choked with waste and worse, and pigs and small children paddle about in the shallows picking over the vile junk they find there.  The houses are just tin or corrugated iron shacks.  Needless to say no running water, power or sanitation.

Freetown’s power is very unreliable generally.  People who can afford it have backup generators, people who can’t have the dark.  I’m charging Mustapha’s phone for him overnight now because he has no power to charge it at home.  The other day he asked me if it was safe in London, because I said it was sad that expats/rich people here live in gated compounds with barbed wire on the walls.  I said it was pretty safe but we did sometimes have terrorist attacks and explained about Westminster Bridge and Borough Market and Ariana Grande.  He looked totally horrified and asked which terrorists.  When I said it was ISIS he didn’t know who they were (and Mustapha is fully into his politics).  It’s a different world.

I’ve been socialising with all kinds of nice people including Mr Justice Edward-Stuart’s son Luke, who lives out here because his wife works for USAID (I have to say in a super-swanky compound) and my TBI colleague Fanny has introduced me to about a million people.  I went for a run with my colleague Tahir last weekend along Lumley Beach which is right in the city (see pics) and  I’m planning a dinner party which, let me remind you, I won’t have to cook. 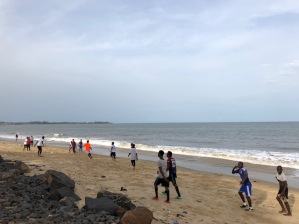 The rainy season has well and truly started now.  There are a lot of spectacular skies like the main one on this post.  Every third or fourth night (at the moment) there are huge storms with lightning every few seconds and enormous rolling peals of thunder following them.  I took a video in the car the other day which I cannot post as the internet isn’t up to it.  The rain was sheeting down the front windscreen in such volume it was literally as though someone was pouring a bucket of water over it.  We had just dropped my colleague off at home, and he lives up a back street which is not only unpaid but has an unofficial gutter or drain, about two metres wide, running down one side of it.  It had only been raining for about 30 minutes by the time we got there, but the gutter was boiling with a foot of water and it was eating away at the remaining road surface.  Soon he’ll only have a river to wade up to get home every time it rains, not a road at all.  Everyone in the car was petrified we were going to tip into the gutter – all except Mustapha who says it will rain more soon.

Flooding in the city is a major, major, problem.  Freetown actually has good deep drains, but they are blocked by waste (rubbish collection is sporadic at best), silt and are sometimes collapsed.  Every year a lot of people, especially in slums, die, and of course last year there was a catastrophic mudslide in which over 1,000 people were killed.  One of the major pieces of work going on by the Mayor and Freetown City Council at the moment is urgent flood mitigation work to fix some of the key blocked/collapsed drains which cause the worst flooding:  see here.  Today was the first day of 15 days of works and my colleagues were on site all day directing the army, the Sierra Leonean roads authority and the contractor to carry out the clearance.  The culvert in question had become completely silted up and blocked up with waste, so that they had to have an excavator to remove some of it.  Even then we ended up having to pay some poor desperate soul to dive into the filthy water filled tunnel to clear some of the blockage by hand.  When I turned up at 5pm for a planning meeting they were totally exhausted, and they’re getting up at 5am tomorrow to do it again (several of them being volunteers). 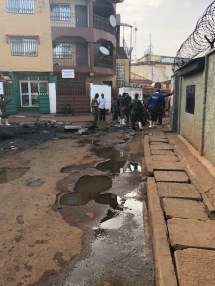 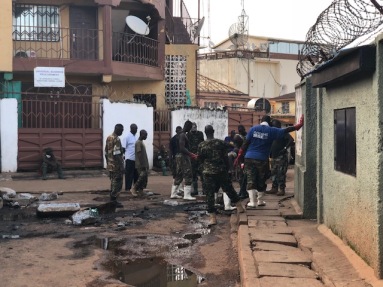 There’s no money so my colleagues have spent the past month raising funds from donors and the private sector to pay for what are absolutely essential life saving works.  It really is sobering stuff.

I was going to post some more pics of my flat but I realise they’re all terrible, so I’ll have to save that up.  Also, it is a bit dark and gloomy at the moment.  I need to go and buy something Africana to brighten it up.  I’ve just been to Madame Wokie to get some v cool skirts made to measure and I’m about to go to a seamstress I’ve been recommended to get her to copy various of my existing clothes.  It takes about a day to make a dress; amazing.  Everywhere you see evidence of incredible entrepreneurship, from the people selling everything from phones to bread to pineapples (carried on the head) on the street, to the people running a barbers shop out of a tin shack.  And don’t forget I have a cook.  Things are pretty great.