At the very least, die trying

Merry Christmas and Happy New Year everyone!  It’s over and I am back in the UK.

I was in a pretty bleak state of mind for a long time after the August flooding.  The last post was written at the end of October (which was the earliest I could bring myself to write even some of it down) and the lack of progress on all my projects was extremely frustrating.  As at December, though, I’ve cheered up:  every so often you have to look back at how far you’ve come, like climbing a mountain when you turn round and realise that that house you can see in the misty distance is where you started, and despite the relentless slog you actually are significantly nearer the top.

[Edit Jan 2020] The Mayor has published a report summarising progress on the Transform Freetown project to mark 1 year since launch.  It’s here – please go and have a look.  It’s truly amazing.

Faecal sludge – the only topic

The best thing that happened just before I left was that we got the trial sewage treatment plant working at Kingtom dumpsite.  As explained in previous posts, we’re using this new technology called geobags and because it needs limited civils works and physical infrastructure, the full treatment plant will be up and running in February next year.  But because of the amazing philanthropy and dedication of a Lebanese Sierra Leonean called Walid Bahsoon and of the GOAL team in Freetown, as at December we had a trial geobag taking raw sewage and treating it, and enabling GOAL (who are the NGO who is “implementing partner” with FCC on the geobags project) to test different systems of getting the sewage from the vacuum trucks into the geobags, and different dosing levels of the polymers which trigger the dewatering of the sewage in the bags.  This is the first ever functioning sewage treatment in Sierra Leone.

The pictures below show the Mayor, the incredible DFID team who are funding the project, the GOAL team, Walid and me (a) inspecting the trial geobag and looking at the clean water running from the secondary treatment pits into the polders (still full of green water from rainy season; they’re getting pumped out); (b) me telling everyone something important and (c) me crying on the Mayor because she made a speech about how far we’d come since we were discussing the start of this project one year ago.

This project will mean that in 2020, there is no more raw sewage dumped at Kingtom – all of it will be treated in the geobags and only treated effluent will be discharged into the streams running through the communities around Kingtom.  So in 2020, fewer people will die in those communities – especially fewer children – because they won’t be being poisoned with cholera and typhoid.  It also means that the Mayor has some time to work out the longer term sewage treatment solution, probably out of town in the waste management park which the World Bank are funding (money available in middle of next year).

The Mayor’s Delivery Unit team did extraordinary work on the system for cleaning the streets and the markets every morning (and collecting the rubbish and taking it to the dumpsites) and this Christmas, Freetown’s streets are cleaner than they’ve ever been.  We’re also still deploying our street bins (paid for by donations), and we empty those every day too.  The system is still coming up against problems because a good system cuts off sources of dodgy revenue; and the people in receipt of the revenue don’t much like that.  But it’s still working every single day – that is, every single day over 400 street sweepers sweep their designated streets, collect waste from markets, bring it to the collection points at specific times, where the allocated tricycle collectors and the allocated trucks come to pick it up.

These are the hardest and the most important things to fix if you want Freetown to carry on being clean.  We’ve now solved almost all the barriers to implementation of the complaints system and in January it will go live, at the same time as FCC receives two new vehicles, specifically for the use of the sanitation officers, to allow them to get out in town to enforce the laws – no doubt there are many bumps in the road ahead (vested interests again, especially in there being no system to monitor fines issued and collected), but in 2020 we should have more effective, visible enforcement every day.

My byelaw remains stuck with central government.  It’s only been 9 months.  The Mayor is going to try to move things along politically in January and I’m looking forward to her WhatsApp telling me it’s been approved.

Em has hired someone amazing to take over from me at FCC.  I’m looking forward to the messages from him too!

Had to put saving the world temporarily on hold in December – turned out Sierra Leone wasn’t going to let me escape without typhoid after all.  My advice would be:  don’t get typhoid.

This is me in the truly dreadful posh-expat doctor’s-with-beds place in Freetown – I broke out after one night as the bubbles in the (pointless) IV were too scary (and there’s actually nothing to be done except eat antibiotics and lie down quietly for a bit).

I stayed in bed or on the sofa for a week and the lovely friends came round with food and chat.  Or I lay on my balcony if it wasn’t too hot and admired the world’s cockiest birds who came to visit.  Note the George Osborne pose.

I haven’t written much about the new friends I’ve made in Salone, because no-one wants to read sentimental nonsense – plus it’s unnecessary because they’re friends for life now, so it’s not as if I’ll need to remember them by looking back at my blog.  But I wouldn’t have made it through if they hadn’t listened patiently to me complaining (once we had a TBI team meeting where Em asked us to enact by standing, sitting, lying down etc how positive we were feeling, and I asked if I could go downstairs and lie on the floor of the room below), and this blog does sort of concentrate a bit on the serious stuff.  There was a lot of giggling done too.

I never get round to taking photos at social events so I haven’t got enough to post here now – but I do have some funny ones from joint birthday celebrations with Fanny and Pam of the anatomically correct vagina cake (long story) and from the quite amazing face painting done at Halloween. 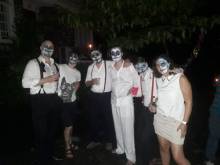 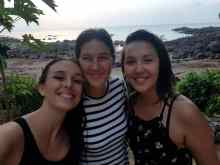 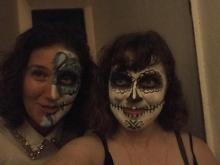 I’m already missing Yvonne more than I can say.  It’s been a privilege to work with her.  TBI asked me to get a video from her for the TBI Christmas conference in London – TBI cut quite a bit as they only had time for a couple of minutes, so I’m putting the whole thing up here.  It’s about what she sees as the challenges and opportunities over the next decade:  please to admire the realism, the optimism, the dedication, the humour, the fact that she did this straight to camera without any preparation or retakes (and the namecheck for me, obviously).  I love her.

They laugh in the face of disaster and they make things happen against impossible odds.

They threw me a surprise party (with collaboration with TBI), which involved a surprising degree of sophisticated and dedicated lying by both Manja and Yvonne.  They made me an amazing present – I’ve had to do it as a link because it’s so heavy on the data:

And so did my driver, Mustapha – will add pic when I get back to London.  And so did the TBI team (please note my title & emoji): 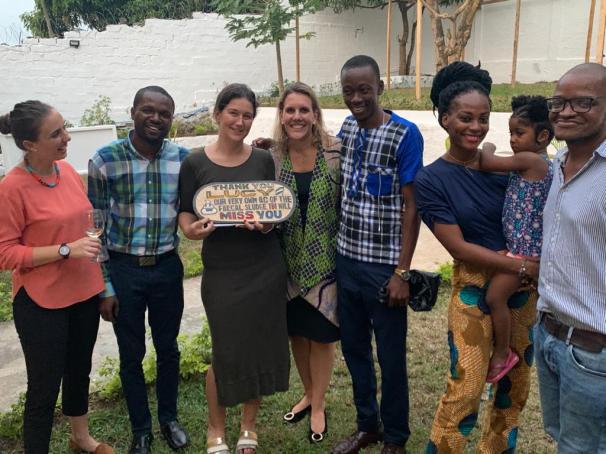 I don’t know quite what to say about the TBI team which can match how extraordinary they are.  I love them. 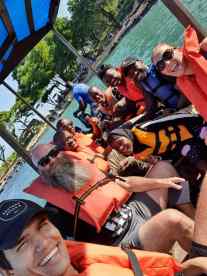 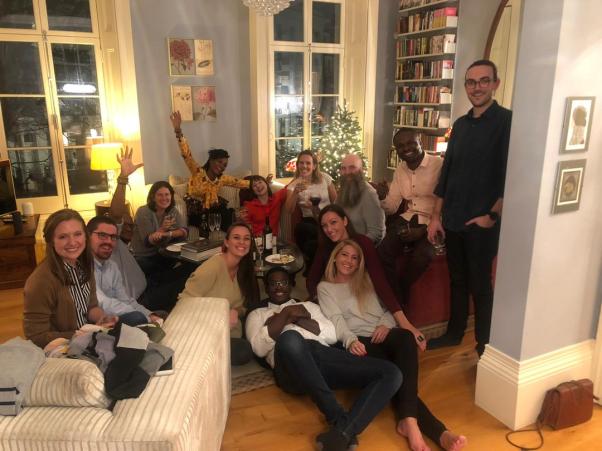 I’m honoured to be friends with people who are actually Fixing Shit So It Stays Fixed, and I’m looking forward to many more drinks and a lot more fun, all over the world.

Plop, the Owl Who Was Afraid of the Dark, had to be persuaded not to be afraid by reference to various true facts about the dark – Dark is Necessary, Dark is Fascinating, etc – but the last chapter is the one that does it for him:  Dark is Beautiful.  A cat takes him to look at the stars if I remember rightly.  Sierra Leone is poor, it’s dirty, it gives you typhoid, the systems are broken!  It’s also beautiful.  I’ll never forget these awe-inspiring skies and the extraordinary rose coloured light. 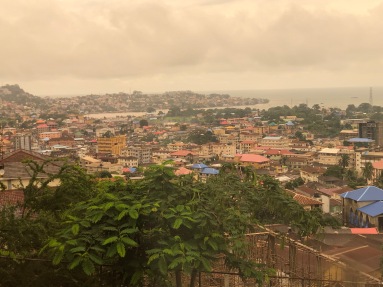 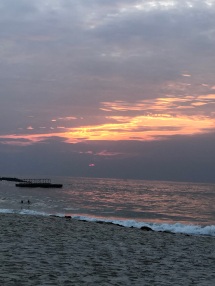 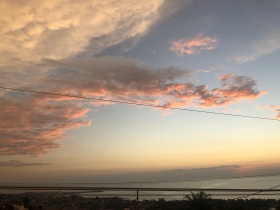 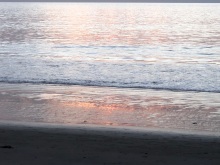 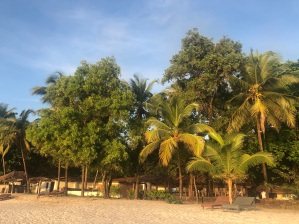 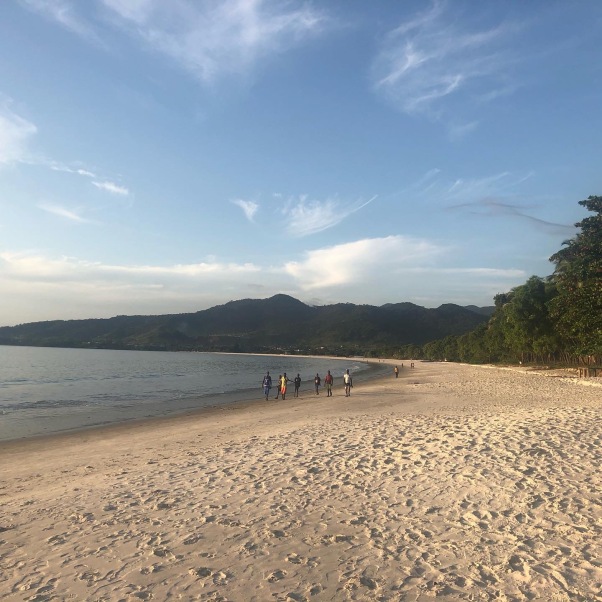 Last word to the kekes of Freetown

It’s been an unforgettable 18 months and I’m so glad to have done this and so grateful to TBI for the opportunity.  The kekes can sum it up as they so often do.* 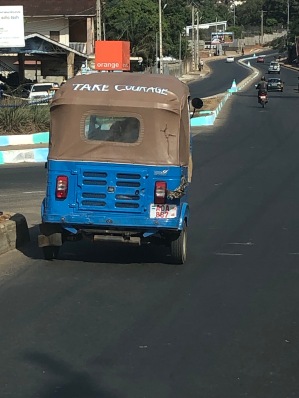 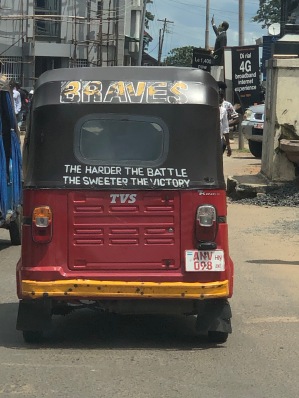 *Please note how clean the streets are.  We did that.

One comment on “At the very least, die trying”