It’s been 8 weeks since the last post and that is basically because I have been working hard – almost (almost) as tough as being in trial.  I’ve been helping the Mayor set up her 4-year plan to Transform Freetown; or, at the very least, the plan for the plan.  It’s Good Works on steroids:  it’s been inspiring, amazing and often funny, but it’s also exhausting, daunting and overwhelming.  There are many serious problems facing Freetown and the Mayor has divided these up into 11 sectors, and for each sector Freetown City Council has established a Working Group.  Each Working Group is made up of relevant councillors and FCC officers, plus all the stakeholders we can think of:  representatives from Ministries in central government, funders, NGOs, civil society, interested private individuals, etc.  Our list looks like this: 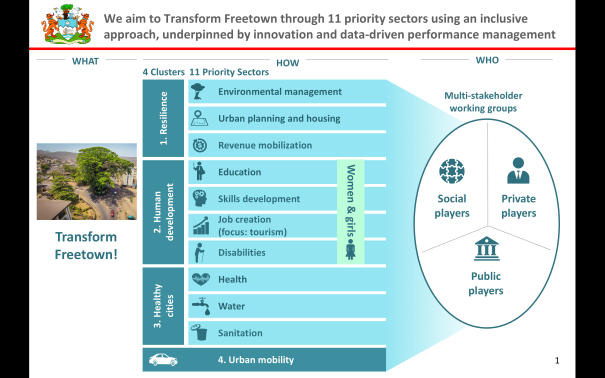 It was the task of the Working Groups to hold an introductory meeting (half a day) and a planning lab (1 – 2 days – sorry about the development jargon) in order to identify both 4-year targets and initiatives which will achieve those targets, then to produce an outline plan for each initiative (outline plan basically has 12 milestones, one for each month of 2019, and one for end 2020, 2021 and 2022 so we can see what we’re aiming for).  I’ve been planning and co-ordinating all those meetings and the outline plans produced:  that’s about 25 days of meetings in 6 weeks.  For most Working Groups, we set two targets, and the number of initiatives varies from two to six per Group:  I think altogether we’ll have started off over 40 projects.

We’re having a big launch event on 24 January 2019.  It’s going to be called the first Transform Freetown Forum.  At this, we’ll formally announce all the targets and the initiatives, and later the intention is to publish the outline plans too, so that the public can hold FCC to account.  This is what the Sanitation targets and initiatives look like: 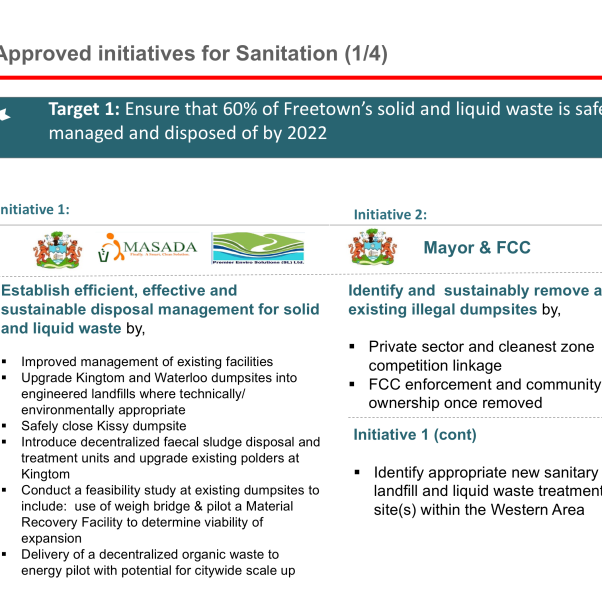 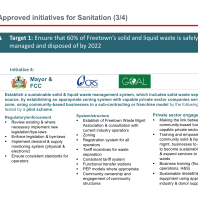 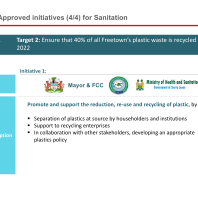 Obviously we have to find the money to pay for all our initiatives.  That’s a huge, huge challenge, but the Mayor is absolutely amazing at attracting funding (and the big donors are being incredibly supportive), and we are also doing a lot of internal work within FCC to improve FCC’s own revenue mobilisation ability (as part of the Revenue Mobilisation Working Group).  There is no way of sustainably providing services to the public unless we can pay for those services.  FCC is entitled to collect various taxes and levy various fees, but it hasn’t been able to do this with much efficiency to date.  A lot of this is itself to do with how poor the Council is:  almost no-one who works at FCC has a computer, and there is no Council wifi.  Many people don’t have an email address at all, and there’s certainly no official council email.  This means that data is held in hard copy not in excel and communications are oral or hard copy.  If all your property tax debtors are listed in a book, it’s hard to sort them to identify which are the 15 biggest debtors.

All this has been enough work for at least three full time jobs throughout September and October.  For most of this time I had someone working with me doing 1.5 of those jobs:  a Swiss guy called Alex who works at McKinsey but was volunteering unpaid for 2 months in Freetown – if he hadn’t been in town I really believe I would have just fallen over and died (he’s also really excellent at powerpoint:  the design of the slides above is his).  It wasn’t just the extraordinary work ethic and amazing work product but having someone to sit and drink wine with and complain to about all the things that went wrong.  At some really low point I found myself staring at but not really reading the writing on the side of an in-tray:

Alex spent the next few weeks tagging messages with any particularly disastrous news with #fccup.

It’s quite lonely at FCC compared to being a barrister.  In Chambers there is always someone willing to listen to you moan (or if not willing they recognise they have to listen to me if they want me to buy them a drink), with enough shared experience so that they really understand why whatever the thing was is so awful.  At FCC that doesn’t apply.

Alex went home in the middle of October and I briefly tried to do some of the things he was doing as well as everything I was doing and immediately had to tell the Mayor it was impossible, and stop.  This is causing me a lot of pain, because the things he was doing were really important.  I’m having to learn all kinds of really hard stuff, like delegating properly and accepting that the thing might not be done very well, and not doing things that do need to be done because we just don’t have the resources, and trying not to become utterly daunted by the size of the task ahead.  The Mayor is inspirational though.  She never seems to get downhearted.  She has this joke she keeps repeating:  How do you eat an elephant?  The answer is:  BITE BY BITE.  And when she says “bite” she snaps it out, full of pizzazz.

Lots of you know this already from FB, but it’s too funny not to add here.  I’m allergic to mozzie bites – I mean, more than everyone is.  A mozzie got in my house at night a few weeks ago and bit me all over my face when I was asleep.  I woke up like this:

After a few hours and some major antihistamine later I looked like this (I’d like to point out the remaining bulges on my forehead as well as the lumpen eye):

The doctor at the clinic asked how I knew it was a mozzie, and of course I had to admit I did not, because I was asleep.  He said that ants and cockroaches had a similar chemical in their mouths to mosquitoes.  I said I did not need to hear any further as I was now quite, quite certain it was a mozzie.  And the very next day I got my landlord to put up the mozzie net I brought out from the UK and hadn’t got round to: 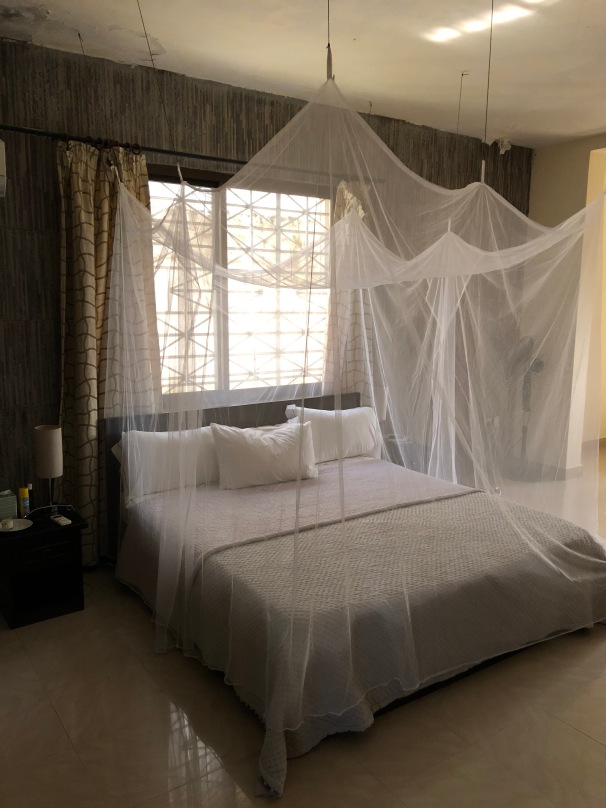 I have also had a different kind of problem, also entirely my own fault.  I bought a safe to keep my money in.  However, for some reason – I maintain inherent fault, but it is possible that the user entered the wrong passcode without realising, and had locked the override key in the safe – I couldn’t open it.  This was a problem as it had all my SL currency in it.  So I sent out a WhatsApp call for help and my boss confessed that her husband had safe-cracking skills as a similar problem had occurred previously to the TBI safe.

So I gave my safe to Wissam and he helpfully cracked it open with an angle grinder and some hot works.  In order to prevent the money catching on fire he had to soak the entire thing in water before and during this operation, which meant that when I got it all back it was wet.  This is particularly disgusting for SL money because it is filthy and stinks.  You also have to have vast wedges of it because the largest note is only worth £1.  I had to get it dry quickly because otherwise it would go mouldy and that really would be a disaster.  So I had to spread it out all over my dining room table and all over the floor, like an incredibly dirty, smelly version of the scene in Lock, Stock… where the posh boys are ironing the £50 notes:

My living room reeked for days and the floor and table was covered in slimy dirt.  Luckily, only a couple of weeks later I got home to find that a shower hose had burst and the entire flat was completely flooded, so I think it’s pretty clean now.

There has been time for a few beach trips and I’ve been on hols (JT came to visit me all the way to Ghana!  It was ace to see you JT!).  Sierra Leone has truly beautiful beaches and the sunsets are reliably spectacular – the light goes the most extraordinary pink: 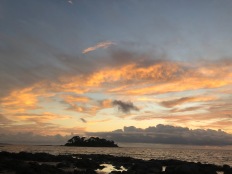 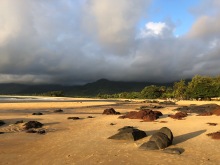 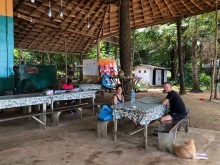 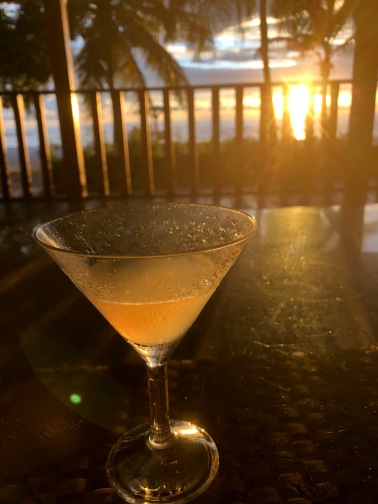 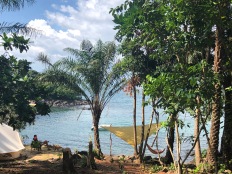 Alex and I also hiked up past a reservoir through some jungle to the top of a small hill in town – also beautiful: 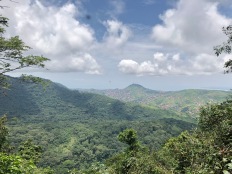 The slogans on the kekes (Salone for tuk tuk) also continue to keep me amused.  I haven’t snapped as many as I should have but a small selection:

Looking forward to seeing everyone at Christmas and NY.  Will try not to repeat all this too often.  I’m missing everyone like mad and have watched my birthday videos (thank you Anna!) far too many times.